The Dow Jones Industrial Average rose slightly during its recent trading on the intraday levels, achieving gains in its last sessions by 0.55%, to add the index to it about 183.56 points, and to settle at the end of trading at the level of 33,781.49, after its progress in an almost negligible way during Wednesday’s trading. To earn about 1.58 points only.

The Labor Department said Thursday that the seasonally adjusted number of initial jobless claims rose by 4,000 to 230,000 in the week ending December 3rd. The consensus on Wall Street was a reading of 228K claims, while the previous week’s level was revised up by 1,000 to 226K claims.

Analysts say that claims are particularly volatile from Thanksgiving until mid-January, so the number of claims is likely to drop to 215K over the next two weeks, but the trend will be positive once distortions due to the annual holiday season fade.

Investors interpreted the data as a sign that the pace of interest rate hikes may slow soon. Federal Reserve Chairman Jerome Powell has repeatedly said that unemployment will likely need to rise for the Fed to succeed in suppressing the worst inflationary wave in four decades. The Fed will raise interest rates by 50 basis points when it meets next week, December 13-14.

Technically, the index rises due to the effect of the continued positive support for its trading above its simple moving average for the previous 50-day period, with the relative strength indicators reaching highly oversold areas, in an exaggerated manner compared to the movement of the index, which suggests the beginning of a positive divergence formation in it, especially with the start of a positive intersection in it. .

All this comes in light of the index being affected by its earlier breach of a bearish corrective slope line in the short term, as shown in the attached chart for a (daily) time period. 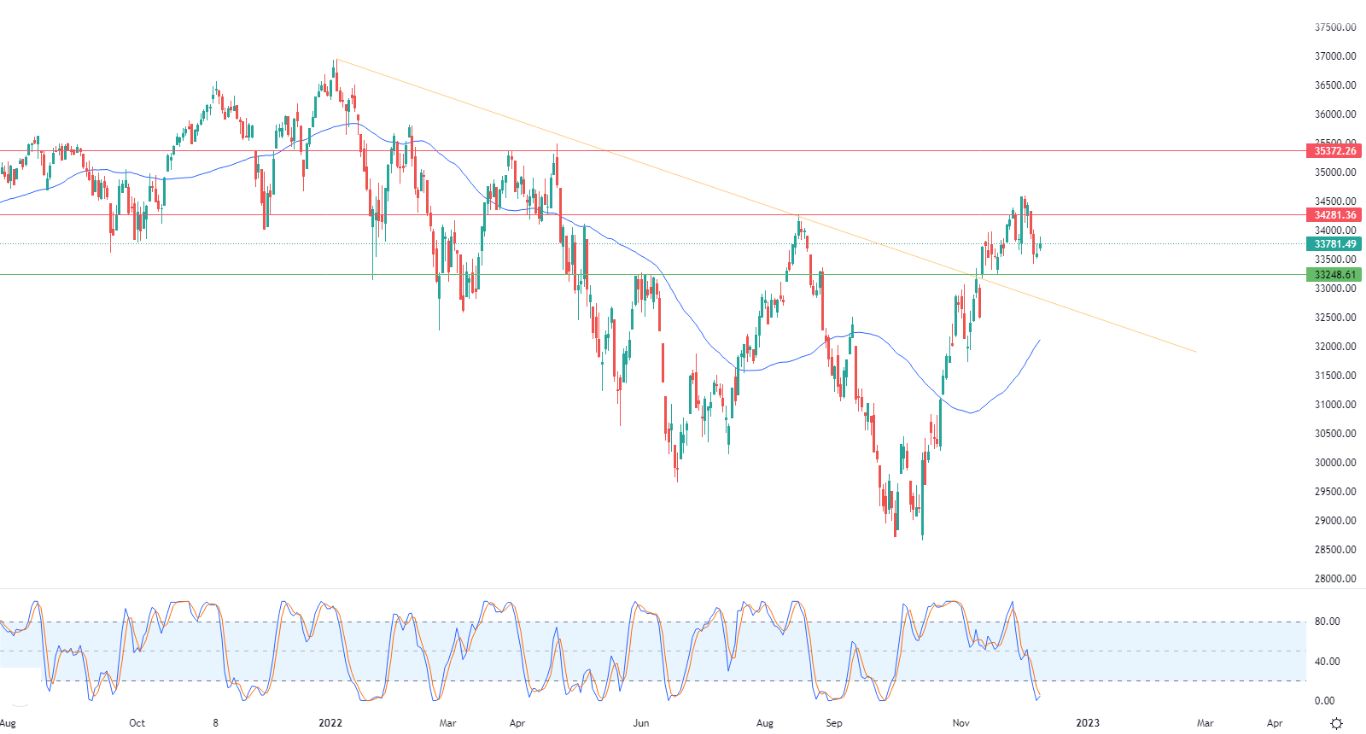 Therefore, our expectations continue regarding the continuous rise of the index during its upcoming trading, provided that the support level 33,248.61 remains stable, to target the important resistance level 34,281.36, in preparation to attack it.
Follow the recommendations of various currencies on a daily basis from here
More Dow Jones technical analysis daily here