Urgent: War drums… the ruble falls to a 3-month low and Gazprom plunges 30% By Investing.com – BestForexEasy Skip to content 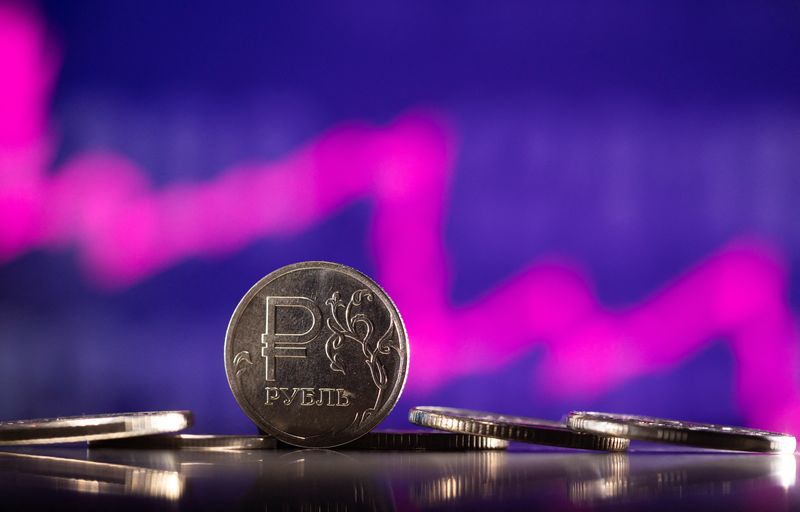 Investing.com – A sharp wave of declines erupted in the Moscow Stock Exchange on Monday, in terms of stocks and the Russian currency, which fell to a 3-month low.

The Moscow Stock Exchange’s declines today come after the Russian forces escalated their attacks on the Ukrainian capital, Kyiv, for the first time last June, after the bombing of the Krech Bridge linking the Russian mainland with the Crimea.

The exchange rate during currency trading on the Moscow Stock Exchange on Monday rose above 63 rubles, for the first time since July 7, 2022, according to official trading data.

The Russian ruble is one of the best performing currencies against the US dollar after the wave of record highs it achieved after recovering from the shock of falling during the Russian invasion.

Ukrainian President Volodymyr Zelensky said there were deaths and injuries in explosions that rocked cities across Ukraine on Monday and accused Russia of trying to wipe his country “from the face of the earth”.

“They are trying to destroy us and wipe us off the face of the earth… to destroy our compatriots who sleep in their homes in Zaporizhia. People who go to work in Dnipro and Kiev have been killed,” he added on the Telegram messaging app.

Ukrainian President Volodymyr Zelensky said: “The sirens do not subside throughout Ukraine… Missiles are falling. Unfortunately, there are dead and wounded.”

The mayor of the Ukrainian capital, Vitali Klitschko, confirmed that several explosions occurred in the Shevchenkovsky district in the center of the capital, while the Ukrainian Deputy Prime Minister confirmed that the attacks on the city center burned people in their cars on their way to work.

A Ukrainian government official said that one of the missiles fell on Vladimirsky Street in Kiev, not far from President Zelensky’s office, before there was information about the possibility that the office itself had been destroyed in the bombing.

The Ukrainian authorities have turned Kyiv metro stations into shelters due to the intensity of the bombing, and explosions were reported in the Ukrainian cities of Lviv, Dnipro and Ternopil.

There is anticipation over the meeting that Russian President Vladimir Putin will hold with the National Security Council later on Monday to discuss the repercussions of the bombing that hit Saturday’s Creech Bridge linking the Russian mainland with Crimea.

The Russian presidency, the Kremlin, announced, on Sunday, that Putin will hold a meeting of the Russian Security Council on Monday, which will include key ministers, political officials and representatives of the security services and the army.

Putin signed a decree to tighten security measures for the Creech Bridge, which was partially destroyed, along with infrastructure facilities that supply electricity and natural gas to Crimea, and also ordered the formation of a commission of inquiry.

And on Sunday evening, the Russian President accused the Ukrainian intelligence services of being behind the big explosion that damaged the Crimean bridge Saturday, describing what happened as a “terrorist act” against a major infrastructure facility.